Longhorn Army Ammunition Plant (LHAAP) is a former, government-owned, contractor-operated and maintained Department of Defense facility located in central-east Texas in the northeastern corner of Harrison County. The footprint of the former U.S. Army installation occupies 8,416 acres between State Highway 43 at Karnack, Texas, and the southwestern shore of Caddo Lake. The nearest cities are Marshall, Texas, approximately 14 miles to the southwest, and Shreveport, Louisiana, approximately 40 miles to the southeast. Caddo Lake, a large freshwater lake situated on the Texas-Louisiana border, bounds LHAAP to the north and east. (See maps below). 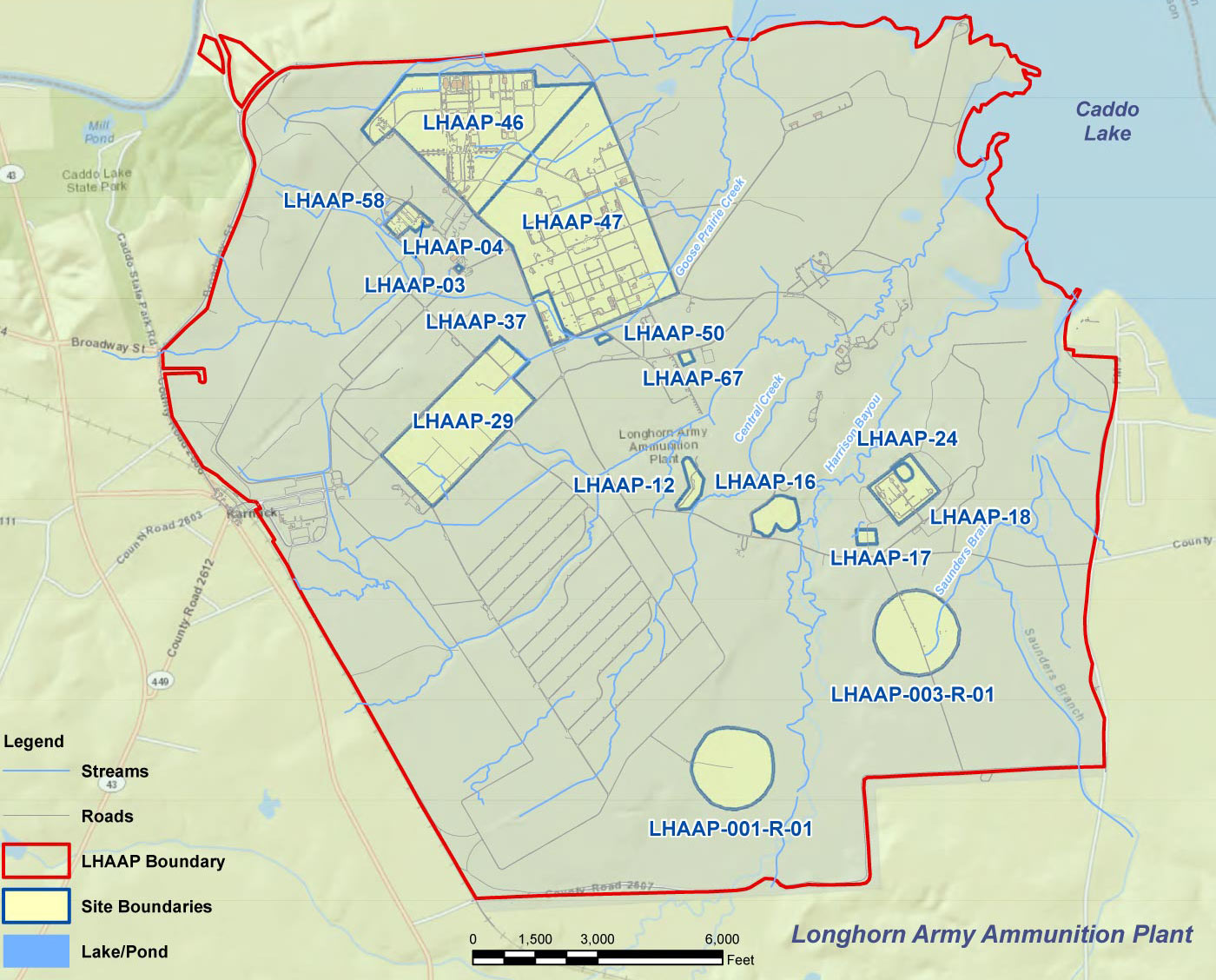 LHAAP was declared excess to Army’s needs in July 1997, with the U.S. Army issuing a contract to remove salvageable property a year later. In 2003 administrative control of the installation was transferred within the Army to the Base Realignment and Closure (BRAC) Division, Assistant Chief of Staff for Installation Management (ACSIM) from Army Material Command.

On May 5th, 2004, the Army transferred approximately two thirds of the property to the U.S. Fish and Wildlife Service (USFWS). Additional property has been transferred to USFWS since then and the property transfer process will continue as remediation and characterization activities are completed at additional sites. The most recent transfer of the Landfill 12 Area Parcel took place in March 2014. To date, approximately 7,000 of the 8,416-acre installation have been transferred to USFWS for management as the Caddo Lake National Wildlife Refuge.

Studies conducted at LHAAP identified contaminants such as volatile organic compounds (VOCs), perchlorate, metals and explosives in on-site soil and groundwater. These areas of contamination are subject to investigation and cleanup under the Comprehensive Environmental Response, Compensation, and Liability Act (CERCLA).

LHAAP was established in December 1941, near the beginning of World War II, when the Army issued a contract to build a six-line production facility for manufacturing trinitrotoluene (TNT) (Plant 1 Area). The first flake of TNT was produced in October 1942. LHAAP ultimately produced 414 million pounds of TNT before production was halted in August 1945, near the end of the war, and the facility went on standby status. The TNT plant was later demolished without resumption.

In 1952, during the Korean War, the government undertook two new initiatives at LHAAP: A partially-constructed facility (Plant 2) was reactivated and refitted for pyrotechnics production. This facility produced 3.4 million pyrotechnic devices (e.g., photoflash bombs, simulators, hand signals, and 40 millimeter tracers) before production was discontinued in April 1956. A facility (Plant 3) was designed and built for producing solid-fuel rocket motors for tactical missiles. Actual rocket motor production began in December 1954. The last major propellant-loading activity in Plant 3 occurred in 1980. Over the intervening quarter century, LHAAP manufactured over 50 million pounds of composite propellant and delivered over 200,000 rocket motors.

Production of rocket motors continued to be the primary operation at LHAAP until 1965 when, due to the Vietnam conflict, Plant 2 was reactivated for the production of pyrotechnic and illuminating ammunition. In the years following Vietnam, LHAAP continued to produce flares and other basic pyrotechnic or illuminating items for the U.S. Department of Defense inventory. From September 1988 to May 1991, LHAAP was also used for the static firing and elimination of Pershing I and II rocket motors in compliance with the Intermediate-Range Nuclear Force Treaty in effect between the U.S. and the former Union of Soviet Socialist Republics.

Various media in certain areas have been contaminated by past industrial operations and waste management practices at LHAAP. Industrial operations involved the use of secondary explosives, rocket motor propellants, and various pyrotechnics, such as illuminating and signal flares and ammunition. Explosives included TNT and black powder. Typical composite propellants were composed of a rubber binder, an oxidizer such as ammonium perchlorate, and a powdered metal fuel such as aluminum. Pyrotechnics were generally composed of an inorganic oxidizer such as sodium nitrate, a metal powder such as magnesium, and a binder. Other materials used in the industrial operations included acids, lubricants, and solvents; particularly trichloroethene and methylene chloride. Waste management included sanitary wastewater treatment, industrial wastewater treatment, holding/evaporation ponds, storm water drainage, sanitary and industrial waste landfills, and demolition/burning grounds. Discharges and releases to surface water, groundwater, and other secondary media have occurred from the historical operations.

LHAAP was placed on the National Priorities List on August 9, 1990. A Federal Facility Agreement (FFA), among the U.S. Army, the U.S. Environmental Protection Agency (USEPA), and the Texas Natural Resources Conservation Commission, now the Texas Commission on Environmental Quality (TCEQ), became effective December 30, 1991 to address the contamination at LHAAP. The environmental cleanup actions at LHAAP are carried out under the CERCLA, with the U.S. Army as the lead agency, in coordination with the USEPA, and the TCEQ, in conformance with the FFA.

LHAAP became excess in July 1997, with the U.S. Army issuing a contract to remove salvageable property a year later. In 2003 administrative control of the installation was transferred within the Army to the Base Realignment and Closure (BRAC) Division, ACSIM from Army Material Command. All operations, including the restoration program, are carried out by BRAC. The Army Environmental Command (USAEC) funds the environmental restoration activities at LHAAP under the Defense Environmental Restoration Account (DERA) for two programs, the Installation Restoration Program (IRP) , and the Military Munitions Response Program (MMRP). LHAAP-001-R-01 and LHAAP-003-R-01 fall under the MMRP, and all other sites fall under IRP.

As a National Priorities List site, the CERCLA of 1980 (42 U.S. Code 9604) is the overarching regulatory framework within which LHAAP’s restoration program is conducted. LHAAP’s reasonably anticipated future use is as a wildlife refuge. The human health risk assumptions for LHAAP are based on the reasonably anticipated future use as a refuge. LHAAP is grandfathered under the Texas Risk Reduction Rules, 30 Texas Administrative Code (TAC) 335. The cleanup goals for groundwater at LHAAP are the federally promulgated maximum contaminant levels (MCLs) for a particular constituent, unless MCLs are not available. If an MCL is not available for a chemical, such as perchlorate, the promulgated groundwater medium-specific concentration (MSC) for industrial use provided under Texas Risk Reduction Rules is used.

The Army is currently in the process of conducting soil and groundwater cleanup activities at multiple sites across LHAAP. For information about each site, choose an individual site from the dropdown above. For information on cleanup techniques, click remedial technologies.